What is the effect of exercise on your flexibility

What type of muscle straightens a joint

What type of disease is cystic fibrosis

Dietary fiber (British spelling fibre) or roughage is the portion of plant-derived food that cannot be completely broken down by human digestive enzymes.[1] It has two main components:[2]

Soluble fiber – which dissolves in water – is generally fermented in the colon into gases and physiologically active by-products, such as short-chain fatty acids produced in the colon by gut bacteria. Fermentable fibers are called prebiotic fibers. Examples are beta-glucans (in oats, barley, and mushrooms) and raw guar gum. An exception is psyllium, which is a soluble, viscous, nonfermented fiber. Psyllium is a bulking fiber that retains water as it moves through the digestive system, easing defecation. Soluble fiber is generally viscous and delays gastric emptying which, in humans, can result in an extended feeling of fullness.[3] Exceptions are inulin (in onions), wheat dextrin, oligosaccharides, and resistant starches[4] (in legumes and bananas), which are nonviscous.[3]

Dietary fibers can act by changing the nature of the contents of the gastrointestinal tract and by changing how other nutrients and chemicals are absorbed.[6] Some types of soluble fiber absorb water to become a gelatinous, viscous substance which may or may not be fermented by bacteria in the digestive tract. Some types of insoluble fiber have bulking action and are not fermented.[7] Lignin, a major dietary insoluble fiber source, may alter the rate and metabolism of soluble fibers.[2] Other types of insoluble fiber, notably resistant starch, are fermented to produce short-chain fatty acids, which are physiologically active and confer health benefits.[1][4][5] Health benefit from dietary fiber and whole grains may include a decreased risk of death and lower rates of coronary Heart disease, colon cancer, and type 2 Diabetes.[8]

Food sources of dietary fiber have traditionally been divided according to whether they provide soluble or insoluble fiber. Plant foods contain both types of fiber in varying amounts, according to the plant's characteristics of viscosity and fermentability.[1][9] Advantages of consuming fiber depend upon which type of fiber is consumed and which benefits may result in the gastrointestinal system.[10] Bulking fibers – such as cellulose, hemicellulose and psyllium – absorb and hold water, promoting regularity.[11] Viscous fibers – such as beta-glucan and psyllium – thicken the fecal mass.[11] Fermentable fibers – such as resistant starch and inulin – feed the bacteria and microbiota of the large intestine, and are metabolized to yield short-chain fatty acids, which have diverse roles in gastrointestinal health.[12][13]

Sources of insoluble fiber include:

* legumes such as beans and peas.

* some fruits including avocado, and unripe bananas.

Dietary fibre is a type of carbohydrate that cannot be digested by our bodies' enzymes. It is found in edible plant foods such as cereals, fruits, vegetables, dried peas, nuts, lentils and grains.

The dietary fiber you get from supplements, fruits, vegetables, legumes, and whole ... Wheat bran is an example of insoluble fiber and most fibrous foods

Insoluble fiber. This type of fiber promotes the movement of material through your digestive system and increases stool bulk, so it can be of benefit to those who struggle with constipation or irregular stools. 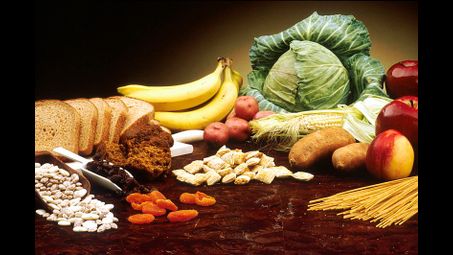 What type of macromolecule is dietary fibers?

What are cellulose pectin hemicellulose and lignin?

Where do the animals get carbon from?

What are the two types of dietary fibers?

What are the examples of natural fibers?

Why doesn't sodium and dietary fibers have RDAs?

You're wrong, both of these have RDAs.

What carbohydrate provides energy for cows but only dietary fibers for humans?

What are some examples of artificial fibers?

Artificial fibers are man-made. Some examples are rayon, nylon, and kevlar.

How many carbohydrates are found in an apple?

19 carbs (with skin) 3 of them are dietary fibers

Why does all your dietary fiber come from plant foods?

Dietary fiber is from cellulose, only manufactured by plants. Insoluble fibers are also only in plants.

What are examples of foods with the two types of fibers?

the two type of fibers are soluble and insoluble :) :) :)

What is dietery fiber's use in coca-cola?

☆
6 Reviews
Health
Created By Raquel Considine
5.0
★★★★★
1 Review
Health
Created By Vilma Hirthe
☆ ☆ ☆ ☆ ☆
No Reviews
Trending Questions
How Relay Coordination Study Performed?
Asked By saspowertech2295
what are the disadvantages of playing dual sport?
Asked By Althea Muñoz
davis 38 2shot how much is it worth?
Asked By Dee Millard
how t o answer?
Asked By Saeed AL-Bulayh
how manny peices of pizza is in a box?
Asked By NICK BURRUS
Do ex-Amazon employees have to pay back their relocation and signing bonus if they are not with the company for more than a year If so, how do they enforce it?
Asked By Stephen Schilling
Hearing jai alai tomorrow?
Asked By Rb Aberonio Bugna
If born 1980 what year would i graduate all age school?
Asked By Clinton Rodney
Still have questions?

Get the Answers App