Can you touch an elf on the shelf with gloves?

No, no no! Do not touch the elf (not even with gloves). If you do touch the elf on the shelf you need to immediately write a note to Santa apologizing for touching your elf. This is the only way the Elf will get its magic back.

There are situations when an adult needs to move or help the Elf and the adult should be very careful and use tongs. Like ones used for BBQ and/or cooking. 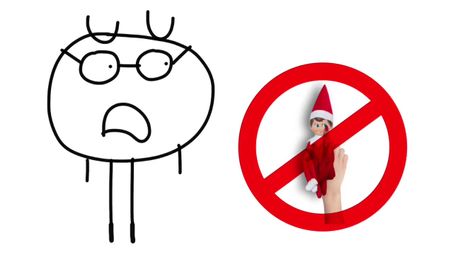 My name is Sylvanas Windrunner.

I was brought into this world by Elune and I was a regular night elf at first.

Then I was slain! I was brought to life again by the Forsaken, and now I am the Dark Lady.

AND I AM ALSO THE BANSHEE QUEEN

No because elves aren't magic duh!

Thanks!, I needed this!

i don't think u can i

yes you can because its not touching your skin

No, you can not please don't or else no presents for you!!

Can you touch a elf on the shelf with gloves?

What can you touch your Elf on the Shelf with Gloves?

I took my elf on the shelf out of its box with tongs, well my mom did

Can kids touch an Elf on the Shelf with a pair of gloves?

Can you touch your elf on the shelf with gloves?

If you touch the elf on the shelf does it loose its magic?

if you touch it too much it will! but it may be touched for a little while

Can you touch a elf on the shelf with Christmas gloves?

Are you aloud to touch a elf on the shelf with gloves?

I wouldn't chance it. Elves are very sensitive, so I wouldn't touch them with gloves or with any other object.

Can you touch an Elf on the Shelf with a bag?

Can you touch an elf on a shelf

Can you touch your elf on the shelf?

No!!!!If you TOUCH THEM THEY LOSE THEIR POWERS & CAN'T GET BACK TO THE NORTH POLE!!!Only adults can touch an elf if they fear for the safety of the elf!If you've accidentally touched an elf, you can tryreviving them by leaving them in the freezer overnight. DON'T TOUCH THEM AGAIN TO PLACE THEM THERE THOUGH!!! Use a pair of kitchen tongs or pliers, but be gentle. Don't place them in the freezer until night time and then leave them there for one entire night.In the morning, remove them (using tongs or pliers) and place them back where you first touched them and leave them there all day and night. It is like CPR for elves. It puts a breath of Jack Frost's air back in their lungs restoring their magic. If they've been able to recover, you will know the next morning because they will have moved to a new location - and you may receive a not-so-nice note from them?!If you are successful in reviving your Elf, be thankful and be very sure not to touch them again because you may not be so lucky the next time.Too much human touch and they lose power forever and become just another ordinary toy doll.Good luck!Read more: What_do_elf_on_the_shelf_do

What is a elf on a shelf?

Santa decided to send scary little dolls to spy on you, and their names- THE ELF ON THE SHELF, Santa is too lazy these days....