is this statement true or falseEither b or c can be parallel to a and d, but not both.? 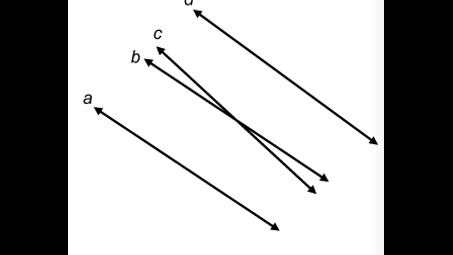 What is the freezing point of coconut oil

Is it possible for two skew lines to be perpendicular

What undefined geometry term has one dimension

Earn +20 pts
Q: Is this statement true or falseEither b or c can be parallel to a and d, but not both.?
Write your answer...
Submit
Still have questions?

What statement about the pedal steel guitar is true?

all of the above (apex)

What statement is the pedal steel guitar is true?

all of the above (apex)

DMV keeps a record of your 1point traffic conviction?

Yes. The question is a true statement.

Is the sentence 'this statement is false' true or false?

Liar's Paradox:"This statement is false." is known as a liar's paradox. It is an illustration of inherent flaws in logic. Another example of a liar's paradox is: "The next statement is false. The previous statement is true." Why it is a paradoxIt is contradictory. If we say the statement is true, then this statement would have to be false since it was true. If we say it the statement is false, it will make the statement itself true, as that is false.Example in Popular CultureThe liar's paradox can be found in an episode of Star Trek where Captain Kirk defeats a "superior" computer by introducing a logic loop similar to the question's liar paradox. (Kirk: "Everything Mudd says is a lie." Harry Mudd : "I am lying.")LanguageIn semantics there is the issue of truth condition, where the meaning of a sentence is conveyed if the truth conditions for the sentence are understood. A truth condition is what makes for the truth of a statement in an inductive definition of truth. The semantic theory of truth was developed from the work of a Polish logician named Alfred Tarski who attempted to formulate a new theory of truth in order to solve the liars paradox. In doing so, Tarski developed the indefinability theorem, similar to Godel's incompleteness theorem. The Theory that the concept of truth for the sentences of language cannot be consistently defined within that language means that such paradoxes as "This statement is false" do not reveal the truth or falsity of the sentence by the words that have been used.Solution to the paradoxLet us consider "This statement is false." This quotation could also be read as "This, which is a statement, is false," which could by extent be read as "This is a statement and it is false." Let's call this quotation P. The statement that P is a statement will be called Q. If S, then R and S equals R; therefore, if Q, then P equals not-P (since it equals Q and not-P). Since P cannot equal not-P, we know that Q is false. Since Q is false, P is not a statement. Since P says that it is a statement, which is false, P itself is false. Note that being false does not make P a statement; all things that are statements are true or false, but it is not necessarily true that all things that are true or false are statements.In summary: "this statement is false" is false because it says it's a statement but it isn't.

When reading music for the piano the treble clef is played with the right hand True or False?

Usually this is the case But sometimes both hands can be in Treble or Bass clef So, the answer is both true and false

is this statement true or falseTwo lines that are perpendicular to the same line are parallel.?

What is a statement that is true only if both parts of the statement are true?

In computing, this is an AND statement.

Two lines in the same plane that will not intersect are parallel?

If this is a 2-D graph and both of the lines are straight, then yes this statement is true. Otherwise it is not necessarily true.

What is the truth value of a statement a square has 4 congruent sides and a rectangle has 4 parallel sides?

Is this statement true or falseNo two vertical lines are parallel?

A parallelogram is a quadrilateral in which opposite sides are parallel?

its true this is a statement..... Is there a question attached

is this statement true or falseIf two lines are perpendicular to the same line, then they are parallel to each other.?

It couldn't be falser!

A quadrilateral is a figure with no two sides congruent and parallel true or false?

False. The sides can be congruent, parallel or both.

What is a true statement about both eft and split disbursement?

One true statement about eft and split disbursement is that they are mandatory.