Pregnant women are strongly urged not to drink alcohol during pregnancy.

Drinking alcohol while you are pregnant has been shown to have damaging effects on the developing baby and may even lead to permanent disability and medical problems in the child after birth.

When a pregnant woman drinks alcohol, the alcohol travels through her blood and into the placenta. The placenta is the organ that develops during pregnancy to provide nutrients to the developing baby. That means when a pregnant mom has a glass of wine, her baby has a glass of wine, too. Drinking alcohol can harm the baby's development. Alcohol breaks down much more slowly in the baby's body than in an adult. That means the baby's blood alcohol level stays elevated longer than the mother's. This is very dangerous, and can sometimes lead to lifelong damage.

Dangers of Alcohol During Pregnancy

Drinking a lot of alcohol during pregnancy can lead to fetal alcohol syndrome in the baby. Fetal alcohol syndrome refers to a group of irreversible physical, mental, and neurobehavioral birth defects including mental retardation, growth deficiencies, attention disorders, heart and nervous system damage, and other lifelong medical problems.

Drinking alcohol during pregnancy may also result in:

Complications seen in the infant may include:

How Much Alcohol is Dangerous?

One drink is defined as:

How much you drink is just as important as how often you drink.

Do Not Drink During Pregnancy

Women who are pregnant or who are trying to get pregnant should avoid drinking any amount of alcohol. The only way to prevent fetal alcohol syndrome is to not drink alcohol during pregnancy.

If you enjoy alcoholic beverages try replacing them with their nonalcoholic counterparts: for example, you might opt for a nonalcoholic pina colada instead of the real thing.

Pregnant women with alcoholism should join an alcohol abuse rehabilitation program and be checked closely by a health care provider throughout pregnancy.

The following organizations may offer assistance:

Alcohol and Women. The American College of Obstetricians and Gynecologists. Available at: www.acog.org/publications/patient_education/bp068.cfm Accessed March 16, 2010. 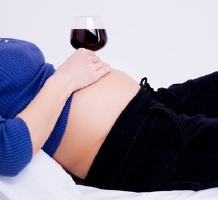 While you are pregnant, you need to do whatever you can to ensure the health and well-being of your unborn baby. In addition to eating well, sleeping well and getting plenty of exercise, there are things you need to avoid. You should never smoke while you are pregnant, and you should avoid drinking alcohol as well. All too often, mothers-to-be downplay the importance of abstaining from alcohol, and their babies often suffer because of it. Learn more about the dangers of mixing alcohol and pregnancy below.

Increased Risk of Miscarriage, Premature Birth and Other Problems

Studies has shown that women who consume even a small amount of alcohol while they are pregnant are at an increased risk of experiencing miscarriages and premature births. Other studies have indicated that there may also be an increased risk of stillbirth. To give your baby the best possible start in life, you should completely avoid drinking alcohol during your pregnancy.

Your baby could develop many serious problems when you consume alcohol while he is still in the womb. These problems are collectively referred to as fetal alcohol spectrum disorders or FASDs, and they include mental and physical birth defects.

From time to time, studies suggest that a small amount of alcohol may be okay for expectant mothers. However, there is no conclusive evidence about how much alcohol is okay. Heavy drinking poses definite risks, but light-to-moderate drinking can cause serious problems too. The best thing to do is to completely abstain from drinking alcohol throughout the duration of your pregnancy.

How Alcohol Affects the Fetus

In the most serious cases, women who drink while they are pregnant may give birth to babies who suffer from fetal alcohol syndrome. Fetal alcohol syndrome or FAS involves several different physical and mental birth defects. In fact, it is one of the most common causes of mental retardation, and it can be completely avoided by simply not drinking alcohol while you are expecting a baby.

Consuming alcohol abusively, especially along with drugs, during pregnancy sometimes causes birth defects or a severe disease called Fetal Alcohol Syndrome. The risk of FAS is increased if the pregnant women receives no prenatal care, is poorly nourished, and is in a very marginal social position. Children born with FAS suffer lifelong mental and physical disabilities. No amount of alcohol during pregnancy is safe.

It appears that no medically documented case of FAS has been reported in relation to a mother who consumed no more than one drink of beer, wine or spirits per day.

Does alcohol have something to do with Down syndrome during a pregnancy?

No, but consuming alcohol during pregnancy can lead to impaired mental development in a condition called Fetal Alcohol Syndrome.

Can alcohol and tablet terminate a pregnancy?

Alcohol can not and the pill depends on which one it is.

Is Alcohol consumption during pregnancy dangerous only during the first trimester?

Alcohol consumption anytime in a pregnancy is dangerous to the fetus

What is it called when a child has problems caused by a mother drinking alcohol in pregnancy?

A mother's excessive alcohol use during pregnancy can sometimes result in what is called "Fetal Alcohol Syndrome".

Will drinking alcohol one day of pregnancy terminate the pregnancy?

No but it will cause damage to the fetus who will not grow correctly and be born with fetal alcohol syndrome.